With the house came an old iron olive press and a rather large collection of mill stones used for processing the olives.  We were going to use these eventually as a feature of the house but have since discovered that the local Mayoress is interested in these for the village Olive Oil Museum they are due to create.  As a way demonstrating our committment to the local community and our new life in Spain we have agreed to donate these items to the museum (much to the disgust of one of the locals who insisted we could get mucho dinero for them!).

The Mayoress has now been to the house to size up the items and work out how in the world they are going to get them out.   You see they are rather large and of a substantial weight!  We now await another visit to find out how they plan to proceed.

5 May update – they are coming to remove the olive press and mill stones on Sunday 14th May!!!!  We had the Mayoress from the village, the Mayor from the village of Niguelas and another chap visit us on 29th April to work out the logistics of moving them and the date for the big day was set then!  As I won’t be there until after the event I’ve told hubby to take as many photos as possible so that I can share the big occassion with you all on line.  I have a feeling there may be a few donkey’s involved in the removal and it could become a spectator event for the local villagers! 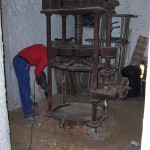 Olive Press before removal from house 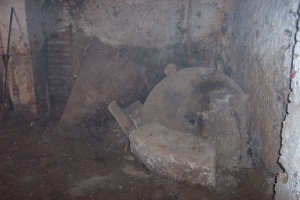 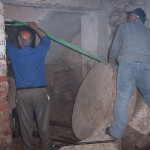 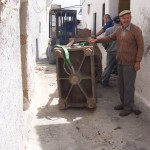 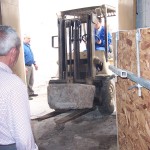